Coming soon: excerpt of Liar, Dreamer, Thief and an interview with its author, Maria Dong!

Bride of the Gulf
Danai Christopoulou

Rattlers
D. K. Lawhorn
This Is What You Came For
Phong Quan
Tina Yu and the Karaoke Time Machine
Allison King
The Ballad of the Octopus
Simo Srinivas

“Once More to the Beat“
Tiffany Le

Born and raised in the Little Saigon area of Southern California, Tiffany Le is a Vietnamese-American freelance illustrator who investigates themes towards cultural legacy, comparative mythology and literature, and social topics through an Asian American lens. She had started her career early by drawing images from cereal boxes at the age of three, and has worked her way up into much larger projects since then. She received her B.A. in Liberal Arts with her capstone project about Vietnamese-American identity and the relationship between generations through the use of visual narrative, and later her M.F.A in Illustration from CSU Long Beach. Tiffany also participates in gallery exhibitions at Gallery Nucleus and Giant Robot as well as table at artist alleys and zine fests at Wondercon, LAZF, and similar events. Aside from these art endeavors, she enjoys exploring urban landscapes and hiking in nature (whenever that's possible), and acts as bunny wrangler to sassy pet rabbits named Sputnik and Apollo. You can learn more about her and her work at www.letealeaf.com 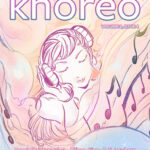 Cover: “Once More to the Beat” by Tiffany Le